Welcome to the World of Fared!

Born on the coast of Texas, his music spans cultures and traditions rooted in ancient repertoires – he has studied under masters in Iran such as Ostads Shaari, Lotfi, and Zolghadar – while possesing innovation and originality that set him apart from his contemporaries.

Shafinury introduces the classical and folk sounds of Iran to his distinct musical world, populated by driving rock beats, sufi-trance-like states, psychedelic loops, hindustani ragas, country lilts and more. He weaves it together with the timeless verses of Rumi and Hafez, modern poets such as Sohrab Sepehri and Forough Farokhzad, in addition to his own lyrics, sung in Persian and English.

He captivates audiences with a powerful voice and a soulful ingenuity on the setar, a delicate four-stringed long-necked Persian lute, wielding it to evoke everything from the slightest melodic wave to a tsunami of sound. He is a masterful Santur player (Persian hammered dulcimer) as well, performing with mesmerizing speed, precision, and harmonic invention. 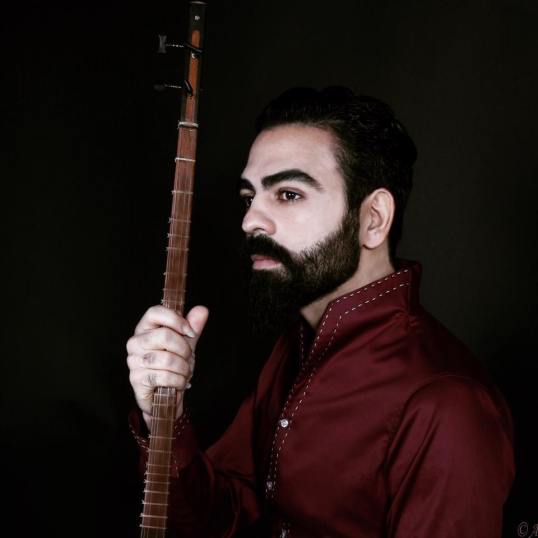 He has produced singles, an EP, movie soundtracks, and Behind the Seas, a full-length LP recorded in Tehran and Austin. He has collaborated with notable classical artists such as Abbos Kosimov, Saba Alizadeh, and Susan Deyhim – and opened for indie-rock band Beirut, as well as the Houston Grand Opera. He has performed in SXSW, Marfa’s El Cósmico, and the Chicago World Music Festival – and headlined both the Iranian.com Music Festival at the San Francisco Palace of Fine Arts and Los Angeles’s Grand Performances at California Plaza.

In perfomance, Fared Shafinury takes the stage in many forms, resonating with diverse audiences. As a soloist, his music and virtuosity are in complete focus. As the leader of various ensembles, he unites world-class talent from wide-ranging genres.

It can be the eclectic post-rock ensemble known as Tehranosaurus, traditional Persian Classical trio Seh-da (اد‮٣‬), or in collaboration with master Hindustani musicians, as in the Setar/Sitar Project. He collaborates with electronic artists such as Govinda & the Sunray Project. Most recently, he is pushing the boundaries of the Persian setar with the manipulation of loops and pedals, incorporating analog recordings of poetry recitations, and crafting meditative performances that entrance the ears and the eyes.