The Microtone project is one that is truly multifaceted, literary interpretations of Persian poems have been paid equal attention to, alongside musical explorations and carefully choreographed dances that all go into making this a feast for the senses. Indeed, Microtone, a project by Fared Shafinury is an artistic endeavour that forms a vast chain of creativity by multiple artisans.

The poems of which Fared has interpreted are numerous, Sa’adi, Rumi et al all have a place in this project. Let us focus on the interpretation of one, titled ‘Crepusculum / Twighlight’, the poem itself is by an unknown writer, with glaring shades of inspiration from Rumi, ‘Crepusculum’ is a fierce and passionate holistic interpretation by Fared, so much longing, so much abandon for acceptable norms, it is the finale so fitting for such project an emotionally charged project.

The poems are recited by Fared on the setar and Rambod Dargahi on tombak, two musical masters who frame the ethereal nature of this project. 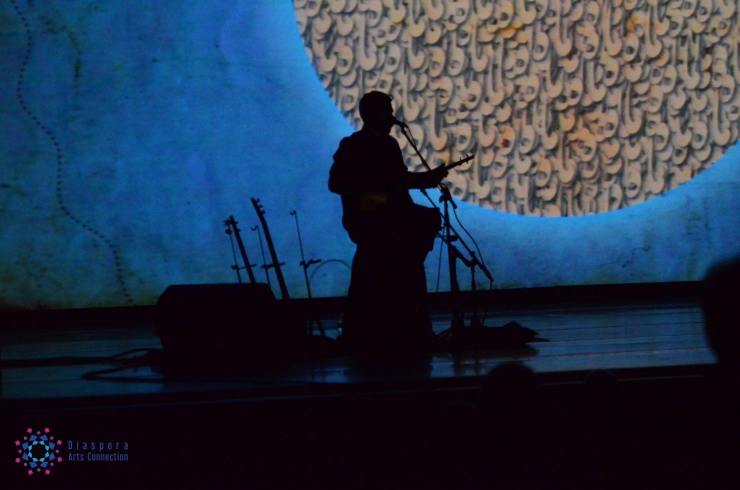 Music and dance has been a perfect marriage since man first explored his creativity with sound. With the Microtone project, Miriam Peretz, a choreographer whose devotion to exploring the transformational aspects of dance has combined her knowledge and her passion to choreograph a magnificent and angelic accompaniment to Fared’s music and interpretations. In ‘Crepusculum’ alone, Miriam has taken the fire and the zeal of the poem and rendered a dance of visual intoxication.

Such a creative feast is Microtone, as the dancer whirls, Fared and Rambod play and recite, the stage is illuminated with the most illustrious displays of Persian calligraphy and animation. Koroush Beigpour, a graphic designer and calligrapher creates a banquet of visuals with classically inspired calligraphy and animator Naghmeh Farzaneh’s moon sequence, which flies across the stage brings a transcendental aspect to the proceedings.